A Journey Home: Racism, Civil Rights, and a New Future for Social Justice and Health Equity in Mississippi and the South

I was aware of environmental injustice, the differential burden of environmental hazards and locally unwanted land uses (LULUs) on communities of color, low-income populations, indigenous peoples, and marginalized groups, such as petrochemical facilities, refineries, power plants, landfills, incinerators, heavily-trafficked roadways, that act as sources of pollution as a young kid growing up in Mississippi.  My family lived near a highway, a concrete facility, and a sewage treatment plant close to the city limits of Vicksburg, a town that had a unique role in trying to preserve the Confederacy and slavery, the dark heart of the South, during the Civil War.

As a kid, I lived near these sources of toxic pollutants.  I also experienced the toxic effects of racism and discrimination, a legacy of Mississippi’s bigoted past.  It was unfortunate, but looking back, not surprising.  Mississippi is a state where White citizens fought against free Blacks during Reconstruction, waged warfare on Blacks through the Ku Klux Klan and citizens’ councils to maintain white supremacy, kidnapped and murdered Emmett Till near Money, MS in 1955, and let loose a reign of terror against Blacks fighting for equal rights and justice during the Civil Rights Movement from Freedom Riders to Medgar Evers’ attempt to integrate the University of Mississippi.

The racism and hate of the Jim Crow South and what I experienced as a youth still lives today in Mississippi in the form of resegregated schools, systemic racism, and structural poverty. The rates of poverty for African-Americans (22%), Hispanic Americans (19%), and Native Americans (26%) in the state are higher than national averages.  In Mississippi, 30% of children are living in poverty compared to the US rate of 20% with poverty rates among Mississippi counties ranging from 14% to 66%.  These inequities can all be traced back to the legacy of slavery and oppression and virulent white supremacy in the politics of Mississippi today.  A state that revels in its Confederate past as exemplified by its reluctance to ratify the Thirteenth Amendment banning slavery up until February 2013 and recent election of a known racist and Confederate apologist to the US Senate in 2018.

I, like those on the Underground Railroad, escaped from Mississippi to a new life beyond its borders, but I couldn’t shake the injustice of the environmental and social hazards that I experienced in my youth. In college, I found both a name for this injustice and my calling. Around 1995, I met Dr. Robert Bullard, father of the environmental justice movement, and Dr. Benjamin Chavis, who famously coined the term “environmental racism” during the fight against the building of a landfill in Afton, a poor majority Black community, in Warren County, North Carolina.  A fight in many ways that was the beginning of the environmental justice movement, a movement that continued the fight for the rights of people of color and the fight against segregation.

In graduate school, I received the training needed to engage communities in applied action-oriented research to address environmental injustice and related inequities. It was Fall 1999 when I attended the second annual community-based environmental justice summit organized by the North Carolina Environmental Justice Network, that I had the chance to see how academic researchers and community activists could work together in partnerships including using science for the people, science for action.  Through the mentoring of Dr. Steve Wing, I learned how CBPR could be an effective methodology to advance environmental justice and address health inequities related to industrial hog production during my dissertation research.  With the guidance of Omega Wilson, President of the West End Revitalization Association, I learned the importance of community-driven research particularly community-owned and managed research (COMR) as a form of scientific self-determination for those who have been overburdened by hazards and underserved due to their lack of access to basic amenities (e.g., clean air, clean water, safe housing).

I recently began collaborating with the Yale Law Clinic to a build a community-university partnership with Black Belt Citizens for Health and Justice (BBC).  The intent is to address years of environmental injustice in Uniontown, a rural community in Alabama that is 90% Black, poor (~12,000 annual household income), and a food desert.  Uniontown hosts a landfill that takes in trash from over 30 states and has a cell of 4 million tons of coal ash that contains toxic compounds such as mercury, arsenic, and lead.  This landfill was built near an old plantation and slave cemetery, an injustice against the dead and their descendants.

During my time as a CCPH Board member, I have been a passionate advocate for increasing our support of community partners, our focus on social and environmental justice, our focus on health equity, and our investment in the South.  My journey as a board member has ended, but my journey home is just beginning.  Both I and CCPH have to journey home to the South to assist so many communities that are impacted by social, economic, environmental, and health inequities.  Our planned national convening in April 2019 is an important opportunity to put our Principles of Partnership into action.  Dr. Bettina Beech, Dean, Bower School of Population Health, at the University of Mississippi Medical Center, will host this national convening.  As a recent addition to the CCPH Board, Dr. Beech brings her expertise in health disparities and work in partnerships with communities through the Jackson Heart Study as a leader of this convening. More information coming soon!

We all must journey home. If you are not a current member of CCPH, please consider joining CCPH today; and if you are a member, consider how you can invest your resources and talents to advance the membership and mission of CCPH in communities and organizations.  We need you now! We hope to see you in Mississippi in April 2019! 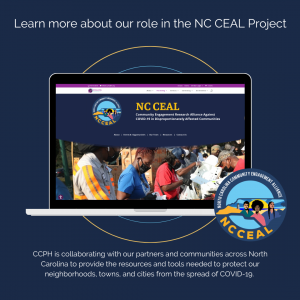